I watch as much NBA as I can. Which is half of what I’d like to watch, and that is probably half of what you need to watch to have a decent knowledge of the league…

But I enjoy The League anyway, and I think there are many good things to see, analyze and pay attention to.

I won’t join the controversy about how many three point shots are too many. Everyone has an opinion. But it is a fact that the record of made threes during a seven games series was broken during the West Conference Finals, and this post is related to three point shooting.

This classic situation is frequently used by the Golden State Warriors, staggered screens. 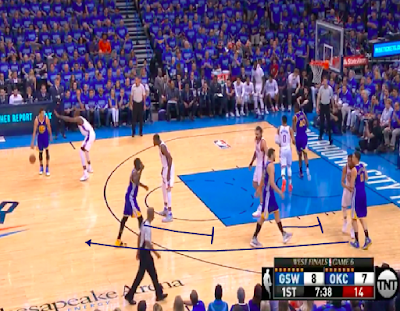 OKC tried to stop it switching in off ball screens to avoid easy catch and shoot options. Which is as good an idea as any other, if the defensive execution is good or if the offense is not ready to read it. Let’s take a look at some clips from games six and seven. In the first two plays, the Warriors run the staggered screen situation we are talking about, while in the third one we see the off ball screen right after an inside pass:

The Warriors reaction to the switch is to cut with the last screener to the basket. Draymond Green and Andre Iguodala are the cutters. As we can see, when the switch happens, the defender who is supposed to take the screener doesn’t protect the rim, and leaves the path open for the cut. In the first clip, there is still one more help, although the second cutter gets a perfect extra pass to score.

With the Finals starting tonight, we should be ready to take a look at how the Cavaliers defend this basic, but useful, situations.
Publicado por Unknown en 4:34